Recently I became interested in astronomy equipment that was, shall we say, less than modern. I was enthralled with the way they used to do things we we take for granted today, such as tell time.

I live about an hour drive from Plantersville, Tx, home of the Texas Renaissance Festival. The Ren Fest as it is popularly known is like a theme park based very roughly on a renaissance time period European town with inhabitants dressing as people from all over the world in that general era. There are a ton of shops (over 300 I read somewhere), shows and rides. One can spend the day watching jousting, see a falconer, ride a camel, shoot a bow and arrow, visit a period tavern (or twenty) and listen to live music. It runs every weekend in October through November and really is a lot of fun.

This year my wife and I went and I was fascinated with a few pieces of astronomy equipment for sale I thought I would share with you.

The first item is an Astrolabe. What is that you may ask? It is a device used to calculate and predict the positions of celestial objects including the sun, moon, planets, and stars. You can think of it as one of the first handheld astronomy calculators or computers. It was also used to determine the local time, for surveying and triangulation. It was first used around 150BC and continued use into the 15th century. 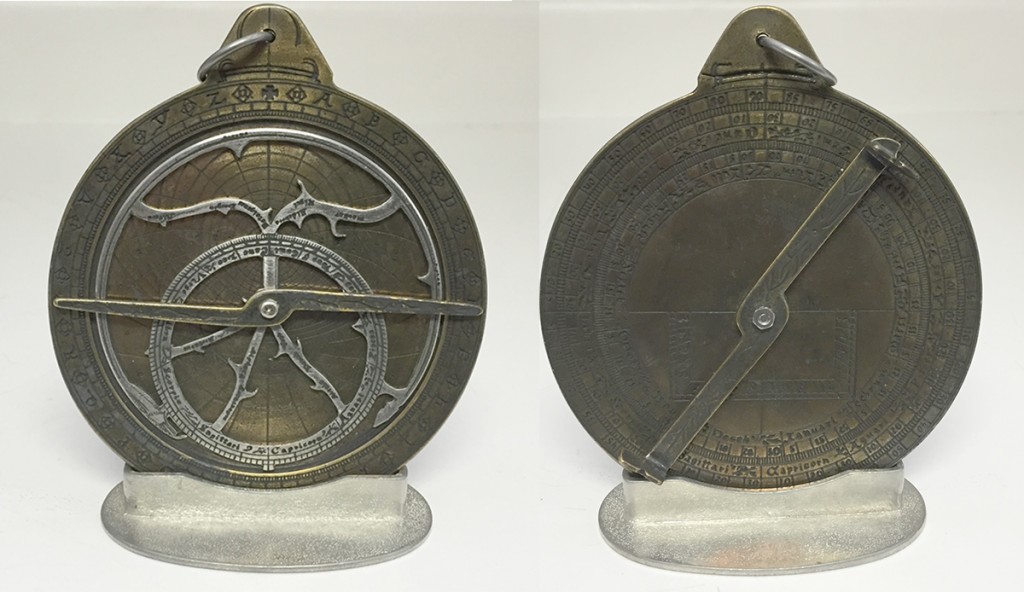 The front and rear of my 4″ bronze and pewter astrolabe.

There is a shop that has a lot of this kind of stuff, all hand made in the workshop of Norman Greene from Berkeley California. The astrolabes came in a variety of sizes with the 4″ I bought being the second largest I remember. They also come in a few finishes including a monotone pewter, monotone bronze, this dual tone bronze/pewter and a gold plated monotone. I opted for the dual tone because I thought it was much better looking and easier to read. I also took the display model instead of a new one as the use gave it a lot of character. I also bought the optional stand you see in the images above.

Included with this device is a book describing a variety of basic astronomy uses such as finding the time, showing the position of stars and more. While giving the instructions is well beyond the scope of this blog post I will give you some of the instructions so that you get an idea of how it can work.

To find the elevation of the sun during the day, hold the device about waist level by the included chain or ring through the top. Rotate the pointer on the rear of the device so that the shadow of the leading part is centered on the rear part of the pointer. This gives you the sun’s elevation in degrees as read on the outer ring where the pointer is pointing (approximately 51 degrees in the image below). 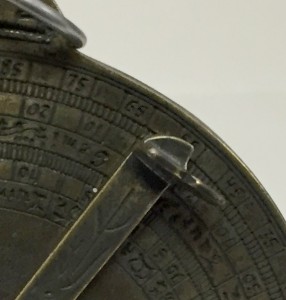 This calculation can be used to further determine the time of day or night (using a star instead of the sun). I don’t pretend to be an expert with this thing but I am certainly having fun learning how it works.

As an aside, mine has a single plate and there are versions with many plates that supposedly can do advanced stellar calculations. If I ever get good with this one I might move to the more advanced model, we will see.

Up next is an Aquitaine Sundial, or Shepherds Watch. This is a much simpler device to tell time which looks like a large ring. I did not purchase this from the Ren Fest as I had already spent too much money on the astrolabe and did not want to push my luck with this too as the wife was already looking at me funny. Instead I bought my Aquitaine Sundial 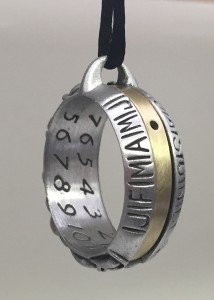 To use one this amazing piece of astronomy equipment, simply adjust the center brass ring to align the hole with the current month marked on the outer pewter colored ring. Holding the device by the included strap/necklace point the hole towards the sun and look where the bright light shines through the hole and onto the scale marked on the inside of the ring. This should show the current time.

The one downside of this simple astronomy equipment is that it has to be made for a specific latitude. The one I have is designed for about 40 degrees north latitude (about the center of the US). Unfortunately I live just over 30 degrees, which means I have to make adjustments to get it to show approximately the correct time. It is still a fun thing to whip out at astronomy events and have people ask you how it works.

Star gazing equipment like this sure does make you respect the ingenuity of renaissance scientists.

You can read more about the Renaissance period at Wikipedia.