The new Orion Observer 90mm refractor is the replacement for the Orion Astroview 90mm refractor telescope that I have recommended for years as the almost-perfect beginner telescope for newcomers to the hobby. That has abruptly come to an end after I got my hands on their new telescope. 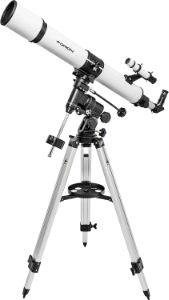 General review of the Observer 90mm

One week with the new Orion Observer 90mm and I had had enough and returned it. The reason? Plastic.

The Orion Observer 90mm is now a huge gob of plastic parts held together by a few pieces of metal. There is enough metal to do a pretty good job of holding those plastic bits together, but just barely. 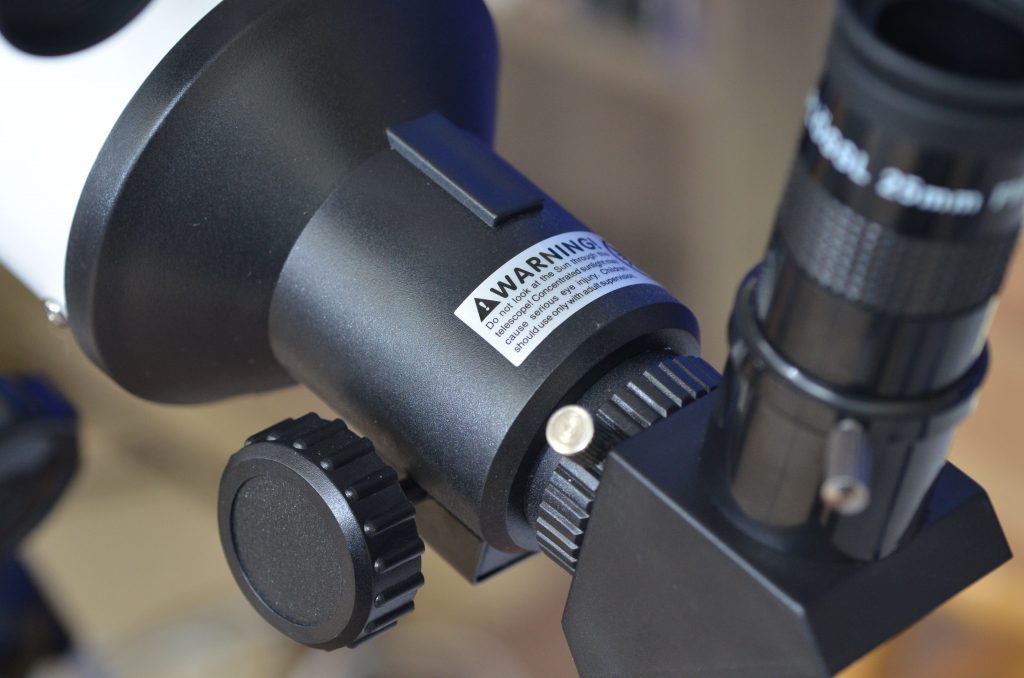 Let’s start with the part that just chapped my….well, hindquarters, the focuser. Now a lot of telescopes these days have a plastic, or mostly plastic, focuser. The problem is that as far as I can tell, it is virtually all plastic and that causes a few problems on the Observer 90mm.

The first of the Observer 90mm’s plastic focuser issues is that it is not smooth. The view is fairly smooth as you rack in and out, but the focuser itself is not. You can feel every gear, and it is annoying. Particularly since I do not have another telescope that rough. Not even the Gskyer telescopes I bought for my new GskyerTelescopes.Net website. Yep, the Observer 90mm focuser is worse than the one on the $50, 70mm Gskyer.

To add insult to injury, the two metal screws in the Observer 90mm‘s focuser tube that tighten the plastic diagonal, are run through the plastic threads in the plastic focuser tube. You know how well that is going to work, right? You guessed it, they will strip out and then you won’t be able to tighten your diagonal anymore.

This leads me to the next issue with the Observer 90mm, the plastic diagonal with metal screws. OK, this is not that uncommon today and can easily be replaced with a nice metal diagonal for less than $20 but still, for a telescope at this price point, they couldn’t have included it?

Orion includes two eyepieces with the Observer 90mm to put into your plastic diagonal, neither of which have their name on them. This is the first telescope I have received that had eyepieces but they were not Orion branded. How bad do things have to get before you won’t even put your name on a product? 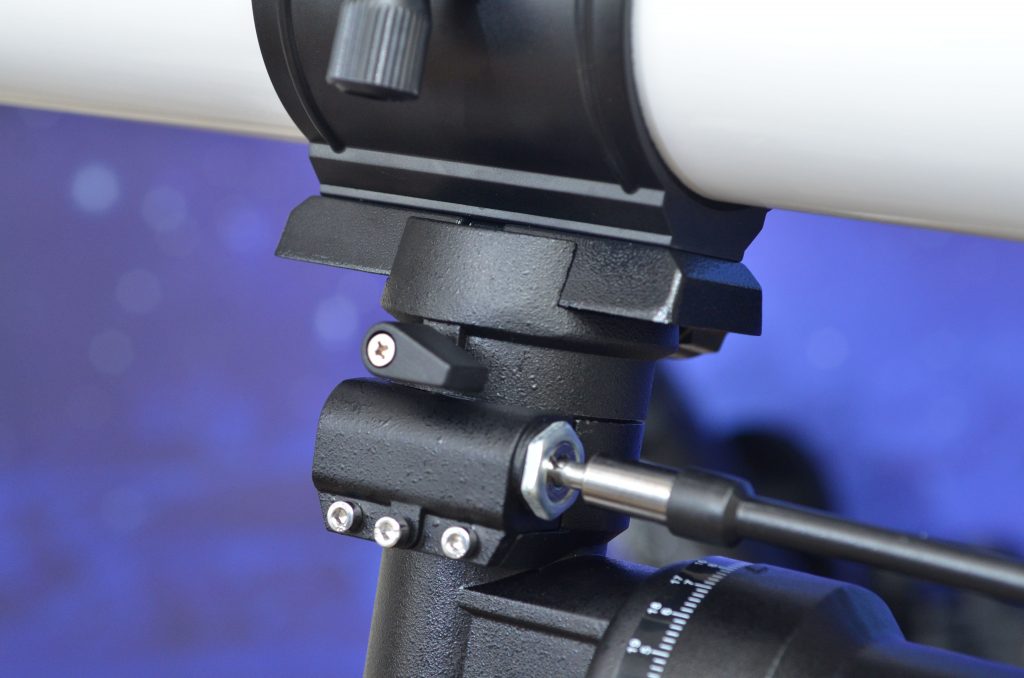 On the bright side, the new Orion Observer 90mm telescope now attaches the telescope tube to the mount using a standard Vixen rail. This has been a pet peeve of mine for years as the previous model, the Atroview, and the model before that, the Skyview, both used a proprietary bolt-on attachment. Yes, you could get a conversion kit from a 3rd party, but what a pain. I always thought that if they used a rail they could use one mount for all their telescopes in that range and make them easy to swap.

What do I know?

Unfortunately, that is all the good news I have for you, at least I put it in the middle to break up this rampage against Orion’s new Observer 90mm.

The telescope tube of the Observer 90mm is held to the new Vixen rail by a, wait for it, plastic clamp. I fully expect this clamp to fail and leave you with a telescope you can not longer attach to your mount without a lot of glue or duct tape (just kidding on the duct tape, maybe). 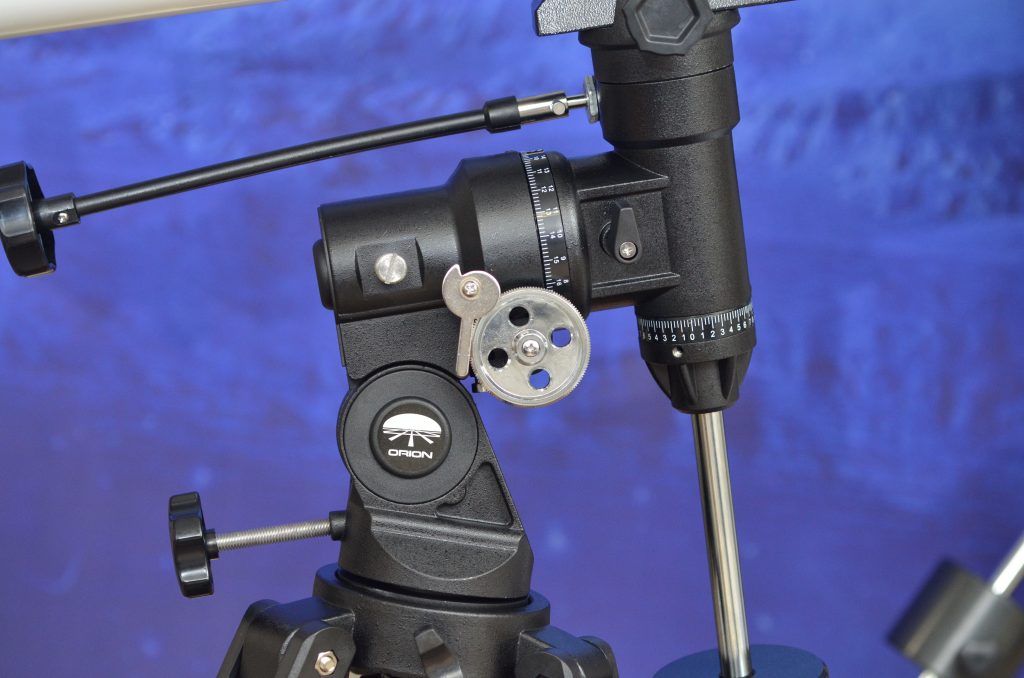 One thing I was really excited about was the new mount that they put the Observer 90mm on. While the Astroview’s mount was far better in the field than it looked, it paled to the old Skyview Deluxe mount before it. I was really hoping that they had returned to a nicer mount with the Observer. My hopes were dashed, again.

While the new mount for the Observer 90mm looks beefy, it is, in fact, lighter than the previous mount. It also is no more stable. I know, it looks like twice the mount, but it isn’t. I am not sure how they pulled that one off. To make it even worse, it is substantially stiffer and harder to move around when unlocked (or using the slow-motion controls). Even balancing the scope is more difficult because completely unlocked the scope will not swing, even when massively unbalanced. This means you have to balance the Observer 90mm by feel which is not a big deal for an experienced user, but for a beginner that can be a challenge.

Moving down to the Observer 90mm’s tripod legs you will immediately note that they are missing the rubber tips on the bottom. This means when the telescope is on something smooth, it tends to scoot and slide around. When I put it in my living room with hardwood floors I could literally slide it around the room with the push of one finger. Annoying at best.

This also affects stability when you are on any kind of smooth surface as the legs on the Observer 90mm will tend to spread and bow. This happens on wooden decks, polished concrete, and I would assume tiles such as around pools and hot tubs. The old Astroview and Skyview models did not have this problem.

I also think the tripod is a little flimsier than the Astroview model as well as being a little shorter. This makes the whole assembly less stable than it could be with a few minor upgrades from the factory (better legs, rubber tips, better locks, etc). 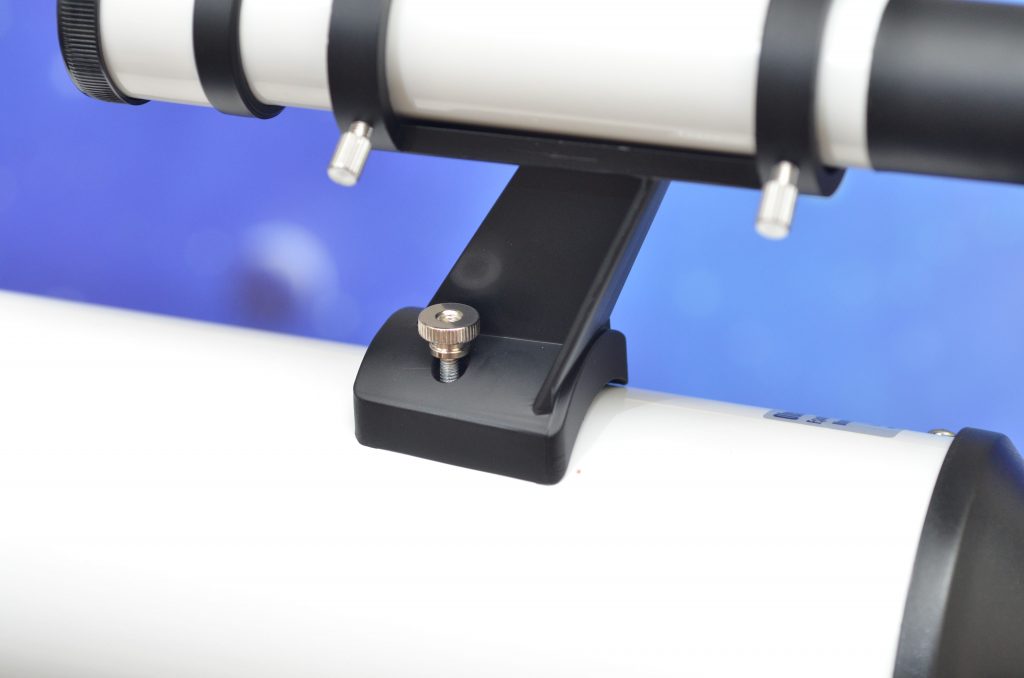 Another place they backed up with the Observer 90mm is the finder scope. In the last two iterations of Orion’s 90mm refractor, this was a standard dovetail mount, now it is a cheap, and plastic, two-bolt mount. Yes, it works, but it also seriously limits you to what you can attach here without an adapter.

It honestly seems that everywhere I look on the Observer 90mm, there is a downgrade of some sort, except the price. They managed to keep that the same.

You might be thinking they had to lower the quality of the Observer 90mm to keep the price the same, and I might be tempted to agree with you, except when you look at their competition. I just had, literally an hour ago, a Celestron Astromaster 90mm EQ refractor delivered, brand new in the box. From everything I have read, I expect it to be my new recommended beginner telescope.

Stay tuned here and on my YouTube channel for reviews of the Celestron scope. Hopefully, it will be an improvement over the Orion Observer 90mm and it is currently $80 or so cheaper which makes it a no-brainer if it passes muster.

Viewing with the Orion Observer 90mm

All of the negative stuff out of the way, how does the Observer 90mm perform when viewing out in the field? The short answer is, not bad at all.

Optically it seems no better or worse than the ones before it. In all fairness, you would have to try pretty hard to mess up something this simple so I am not really bragging on the scope, just saying that where they did seem to goober the rest of the scope, they appear to have left the optics mostly alone.

I am not sure it has much in the way of coatings as reflections are clear with no color cast and that is rare in coated optics at this price range. It does not seem to change the views though. There seems to be no more or less of a magenta halo around bright stars or the moon.

Speaking of the moon, one of my favorite targets with any 90mm refractor, the views are nice and crisp with good detail as long as your seeing conditions permit. It has been stupid-hot here in Texas lately so the one week I spent with the Observer 90mm had some terrible seeing conditions. The scope performed no worse than my Orion Astroview or Orion Skyview Deluxe though, so that is something.

I did really hate the stiffness of the Observer 90mm mount though. It and the focuser really detracted from otherwise nice viewing sessions.

Conclusions on the Orion Observer refractor

If you bought the Orion Observer 90mm, and you are within your 30 days, return it. There are better options.

My first recommendation for a replacement is to see if you can find an old stock or used Astroview 90mm refractor, or even better, a Skyview Deluxe 90mm refractor if it has been well cared for. All of these are currently (July 2022) available on eBay. I would even pay the same price for a good used Astromaster as what Orion is asking for a new Observer 90mm. It really is that much of a better telescope. 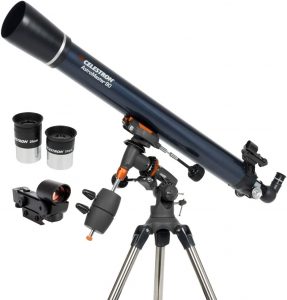 If all that fails, and from every indication so far, I would look at the Celestron Astromaster 90mm EQ as a good option for less money. I will have more information on that later, but just moving the unopened box from the front porch to my office tells me it is a seriously more substantial product than the Observer 90mm.

I hope you enjoyed this Orion Observer 90mm review!