This is a mirror of the TriAtlas project by José Ramón Torres and Casey Skelton whose website at https://www.uv.es/jrtorres/triatlas.html is no longer available. What follows is almost a verbatim copy of that site.

Here you can find the TriAtlas star atlas pdf of one of the best sky atlas available for free. Larger and more through than the sky & telescope’s pocket sky atlas, you should really enjoy these.

(1)     TriAtlas Chart arrangement by decreasing R.A., similar to Uranometria 2000.0 2nd ed: the eastern side of the i chart is the west limit of the i+1 chart

(2)     TriAtlas Charts are now in portrait format. This allows viewing a larger region of the sky, placing two consecutive charts one by the other.

(3)     Label overlap problem practically eliminated in the TriAtlas. Even highly congested fields can be easily interpreted. The system is quite good although I think I can still do some more improvements in the future.

(5)     Double stars labeled by name and indicated by horizontal tips, but best double stars are plotted like in the former release of the TriAtlas although in bold outline

(6)     Larger fonts, much more readable and still good for the scale of the maps. White outlines help to reduce the interferences of background stars

(9)     Constellations codes overlaid within each TriAtlas chart in each set

(12)    Line sizes now indicate brighter objects (e.g., a brighter galaxy has a thicker outline than a fainter one). Selecting the bright objects is now much easier!!!.

(13)    Much more galaxies are oriented according to their position angle

(14)    Messier objects indicated in bold and larger font. Herschel’s 400 objects are also highlighted in bold font (great for picking up the best objects).

The TriAtlas charts have been designed to be printed in a good quality laser printer (use at least 600 dpi and the best quality your printer allows) in A4 format, which is a standard ISO measurement usual in European countries, measuring 29 x 21.7 cm. However, the maps are vector-based and can be expanded to fit any paper size, provided that your printer has enough resolution to provide the appropriate quality. To do this, go to the print dialog of Adobe Acrobat or Adobe Reader and modify the parameters in the page management pane. The really important is page scaling: change it to a number smaller than 100%  to zoom out and enlarge margins, or no scaling if you have a laser printer and you are printing A4 pages. The results are optimal in A4 page size.

The TriAtlas includes plenty of deep sky objects with enough reference stars to situate them in the sky with high accuracy; no other current deep sky atlas includes so many DSOs. The constellation lines and boundaries are now overlaid, which contribute to keep the perspective. Auxiliary coordinates grid are abundant, but neither distracting nor intrusive. Coordinates labels are placed at both sides and bottom of the charts to facilitate binding with the maximal page filling. There are multiple navigating aids that make usage in the field easy and comfortable, either to zoom in or out, or to move to neighboring charts. It is also extremely handy: A4 or similar size allows manipulating the atlas with one hand whereas we are moving the telescope with the other. A and B sets constitute a standard-alone atlas by themselves; C-charts allows locating very faint objects with very good probability of success. Graphically, some of the the features can be summarized as follows:

TriAtlas C chart set (A4 for European and other ISO users, and Letter 8×11″ for USA users)

About the TriAtlas C-set , which includes the most powerful maps:

TriAtlas B chart set (A4 for European and other ISO users, and Letter 8×11″ for USA users)

The working horse in the TriAtlas is the B-set, with a linear scale very similar to the Sky Atlas 2000 deluxe but with much more accuracy, stars and deep sky objects. It makes the location of object extremely easy, and at the same time the scale and constellation lines helps a lot to relate the sky with the maps. This set is my personal favorite as master sky atlas.

TriAtlas A chart set (A4 for European and other ISO users, and Letter 8×11″ for USA users)

Finally, the TriAtlas A-set has two purposes: to act as an index for B and C sets, and to display the brightest and best deep sky objects. This is similar to a 7-mag star atlas but reaching nine magnitude. This makes it more useful and it allows locating many bright objects without the cooperation of the other sets.

INTERMEDIATE B-C SET: 218 TriAtlas charts in A4 / letter – If you want a powerful atlas but you cannot print the 571 charts of C-set, this can be the solution. It is my personal favorite edition.

PANORAMIC B SET: 31 charts in A3 / tabloid – A large scale atlas very similar to Sky Atlas 2000, but with much more stars (under development)

NOTE: All links have been updated, contact us if there is any problem

I am looking for the files for the USA version of the TriAtlas B/C charts and all the TriAtlas panorama charts. If you have them, PLEASE use the contact form at the top of the page to let me know.

TriAtlas C for iPad and iPhone

Norbert Schimdt, a German programmer, developed an application initially for iPhone and later for iPad to make the TriAtlas C-set available in these devices. We granted him permission as far as the application was free (as the atlas is and has to be). He has built an excellent application that makes the use of the atlas in the field a true joy. It is relatively modest in size (400 Mb), navigable (passing charts with the neighboring charts border tags and also through an index chart), red color with controllable brightness (or white background), compact, and quick to use. The link to the apple store can be found here. He developed it under the premise that it would be free for everybody, and we stand here our wish it has to be free and altruist as the TriAtlas itself.

A look to the (obsolete) TriAtlas first release (June 2007)

This is the way I printed the TriAtlas PDF charts, in a single-volume book with the most comprehensive sky atlas available. I prepared mine including all sets (A, B, and C charts) before the summer 2007 holidays, and I was using it in three different telescopes during all the summer, with an extraordinary performance. It allowed locating with accuracy many thousands of deep sky objects, and it was an invaluable help for catching objects at the threshold, stellar planetary nebulae, etc. You just couldn’t miss objects because you didn’t know exactly where to fix your attention at the eyepiece field, or because there were too few stars to spot the place. In addition, the collection of objects was very comprehensive. No other printed atlas plotted more objects (well …except the TriAtlas second edition!!!).

The TriAtlas included navigating aids to jump to the neighboring charts sets at higher magnifications. The chart number was in the lower right area (large outline font). Each chart included nine navigating points giving the chart number of the nearest neighboring charts within the same set, indicated in bold font in the borders (the corners and in the middle sides). There were also smaller outline numbers in the TriAtlas A-charts indicating the location of the included B- and C- charts, and similar numbers in the TriAtlas B-charts to jump to the TriAtlas C-charts. It was very easy to move around a given area, even at high magnification, and swap between sets. Constellation lines were marked in all sets to make the identification in the sky even easier. 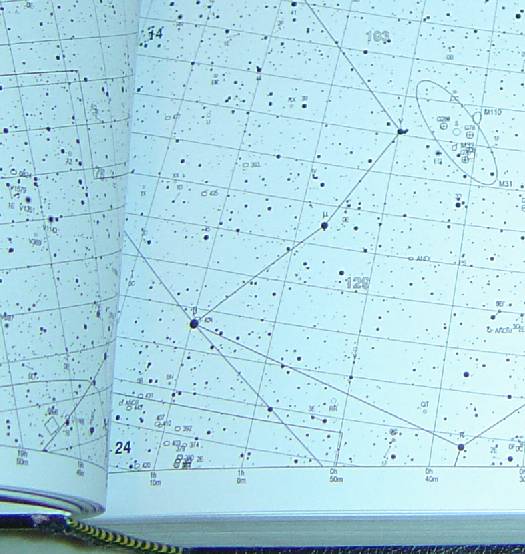 If one preferred a comfortable field atlas instead, he/she only needed to print sections A and B (around 120 A4 pages). I prepared mine like in the picture, protecting the pages of moisture within a folder with plastic sheets. The B-set had a scale similar to Sky Atlas 2000 deluxe edition, but with many more stars and objects. Other people printed the TriAtlas in A3 or similar formats. The maps were vector-based and could be enlarged without losses in resolution.

The charts were large PDF files (=save them to disk before opening). Food output was obtained printing them with no shrinkage at 600 DPI (I generated my own charts sending them directly to the printer for the best quality, and PDF charts were not so perfect).

At that state, the TriAtlas was still unrefined, with overlapped labels and objects, but nevertheless a very nice work.