Believe it or not, here is a way to stop antenna wind noise. Anyone who has ever added a whip antenna to their vehicle knows they can make pretty awful noises. Do a search online and you find suggestions such as move the antenna, change its angle, or cover it with some kind or sleeve. I have seen some pretty interesting ideas people have used to stop antenna wind noise. Fortunately the automotive engineers figured it out a long time ago and we just need to look at their work.

I had two cars in my driveway with whip antennas on them which did not make noise. Both of them were about the same length, and both had one thing in common.

Take a close look at the picture above and you can clearly see the difference between the factory antenna on top and the aftermarket antenna on the bottom. That’s right, there is a spiral around the factory antenna. Didn’t someone say that spiral was so that they could put a longer wire in a shorter antenna? That person was probably incorrect. The spiral distributes the wind load differently just like some of the World’s largest buildings including Burj Khalifa and Shanghai Towers. I’ll bet this is how the engineers managed to stop antenna wind noise with the factory antennas on all the cars and trucks running around.

Will this work for aftermarket antennas? I seem to remember from my days  working at a truck stop that some of those fiberglass CB antennas bolted to the side mirrors on 18 wheelers have a spiral pattern on them. Can you just put a spiral around any antenna to stop antenna wind noise and call it a day? Lets see!

The first thing we need to do is figure out how to get a spiral around the antenna without affecting its radio wave propagation. It just will not do to stop antenna wind noise but make the antenna non-functional. If that were the case, we could just cut the antenna off and be done with it. How much fun would that be? So, to keep it working, that eliminates anything metallic or that can get wet. Sting would be perfect except for the whole getting wet thing, but what if we could keep it from getting wet?

I attached heavy cotton string to the base end of the antenna with electrical tape. This is just temporary so I can proceed to the next step.

Then I spiraled the string around the antenna using the factory antenna as a guide to know how far apart the spirals should be. I had no way of knowing if using the same spiraling would work given a different antenna thickness, location and frequency but it was a place to start. It seems that a given spiral over a given length for a given speed of air might just be all that is needed to stop antenna wind noise.

Now I have to come up with a way to stop the string from getting wet and hold it in place. How about heat shrink tubing? You know, that stuff that when you apply heat, shrinks tight around electrical connections. Is there any reason it won’t work for this?

I purchased a roll of 1/4″-1/8″ heat shrink tubing and cut it three sections to fit roughly a third of the antenna. The reason I used three smaller pieces instead of one large one was I was having a hard time keeping the spirals approximately evenly spaced while sliding the tubing on. Using three pieces made this a lot easier. 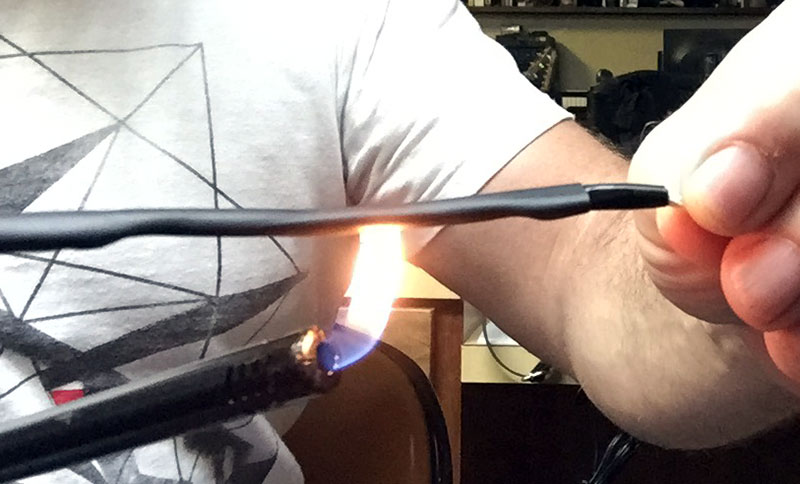 Once it was in place on the antenna I could use a BIC lighter with a long nose to shrink it into place. When doing this I had to make sure that the flame was well away from the string as dry cotton tends to burn quite easily. Yes, that last part is from experience 🙂

The heat shrink I bought I think might have been a little too big as it did not shrink down as tightly as I had hoped. It did however create a spiral pattern which you can easily see. I cut the string on both ends of the antenna and used smaller pieces of tubing shrunk over the joints to makes sure it was as water tight as possible. The only thing left was to test it out and see if this idea did indeed stop antenna wind noise. 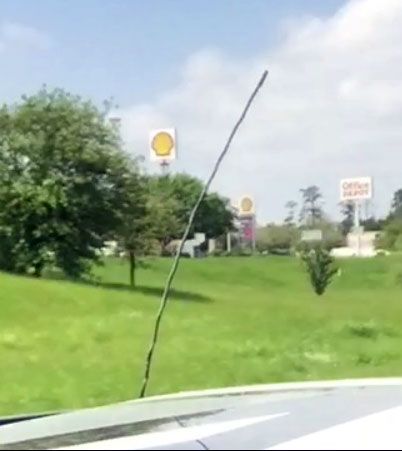 This picture of the antenna on the car was a screen grab from a video I shot by holding my iPhone out the sunroof while traveling down the road at seventy five miles an hour. I wanted to see how much drag this created on the antenna. It does seem to bend a little but it does not seem too bad. I wonder if I use some heat shrink just a tiny bit tighter if that will reduce the load? I’ll think about trying that in a future update.

The good news is that I can no longer hear the antenna wind noise at all. The spiral seems to have done the trick!

UPDATE: I purchased some slightly smaller heat shrink (4.5mm instead of 6.35mm) and the end result was vastly superior. Using the larger tubing the final product was still squishy and larger than it needed to be. The new smaller tubing tightens up very well and looks a lot more like the factory antenna. This should not only stop antenna wind noise but also reduce the antenna wind load over the previous version. It also looks better 🙂

UPDATE 2018: I had some concerns about long term use after the mods to stop antenna wind noise but after using the modded antenna for two years, it worked perfectly. The antenna has stayed in place, has not bent too much, and of course, is silent. I have not had to do anything as far as repairs or adjustments and the antenna still works perfectly.

I hope this helps you stop antenna wind noise on your vehicle!