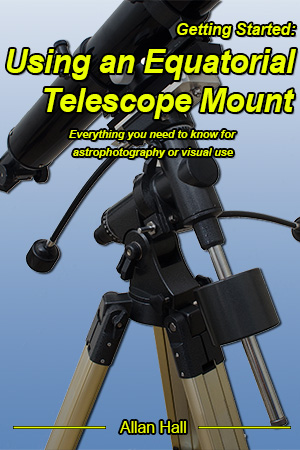 For a couple of years now you have been able to purchase the book Getting Started: Using an Equatorial Telescope Mount from Amazon as a Kindle book. After numerous requests I have finally restructured the book and released it as a print version for those who want an actual book to take with them outside and learn their new mount.

Both versions of the book are available on Amazon.com via this link.

Thanks for making it a best seller!

1) Carries more load than my Orion SkyView Deluxe, so better suited for my 127mm refractor

2) Tripod, weights and hand controller interchangeable with my Orion Sirius in case anything happens

3) Uses same interface, drivers and cables for computer control so I am already set up to use it with my laptops

4) OK, yes, I am kind of an Orion fanboy, but with their good products and excellent customer service, it is hard not to be. 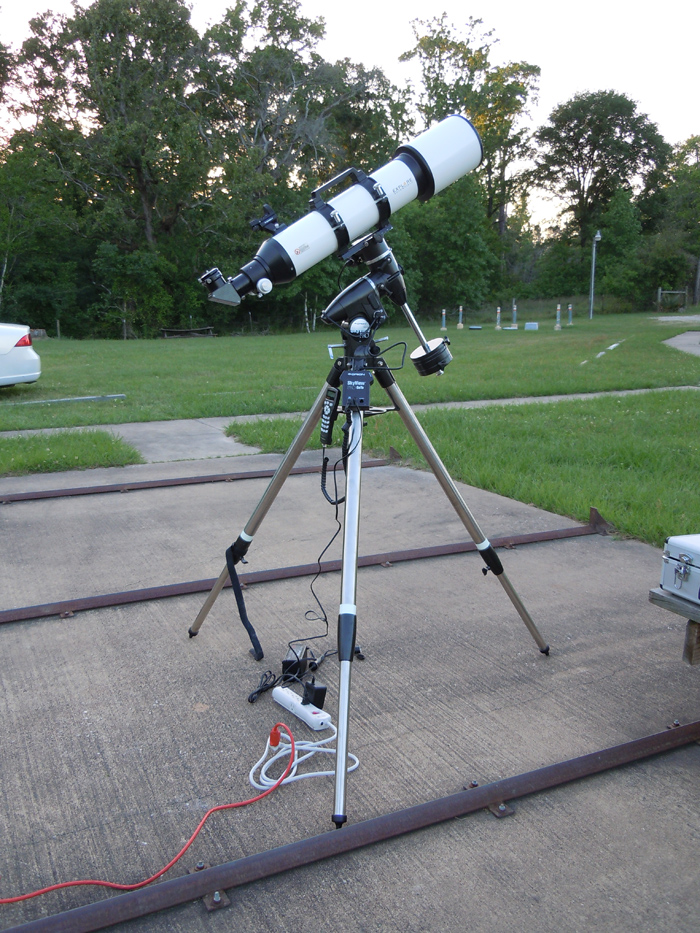 After purchasing the polar scope separately and installing it in the Orion mount, I felt as if I was using the younger brother to my Sirius mount. Setup was fast and easy as the mount worked exactly the same as the Sirius but is lighter. This allowed me to be setup and running, including polar alignment, in about 15 minutes.

Running the mount is again, much like the Sirius mount. Since this is an EQ-5 based mount much like Celestron’s CG-5 I expected it to have much more in common with it than the Sirius, and indeed the motor covers, external cables and polar scope covers make it similar in appearance, but not so much in function. While the CG-5 is a capable mount, it has earned the nickname of “coffee grinder”, and if you ever hear one slew, you will understand why. The Orion SkyView Pro goto on the other hand sounds just like the Sirius, quiet and smooth. 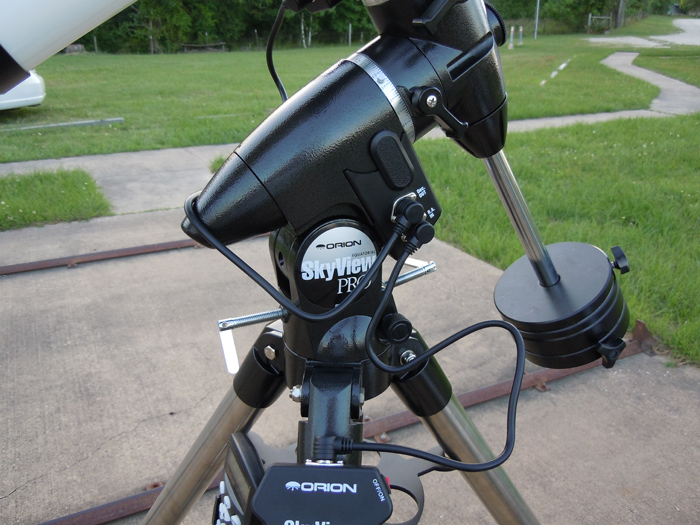 Accuracy is exactly what you would expect given it has the same controller, excellent. Load capacity seems higher than listed by Orion (as it is for virtually any Orion mount) and I would have no problems running the Orion SkyView Pro with more weight than a CG-5. The tripod is only 1.5″ tubes as compared to the CG-5 which I believe has 2″ sections, but as with my Sirius mount once the mount is at it’s minimum height (which is always where you want to image from) stability is not an issue at all. If for some odd reason I needed to image from a fully extended position, then I might consider replacing the tripod with the 2″ version from the Atlas. 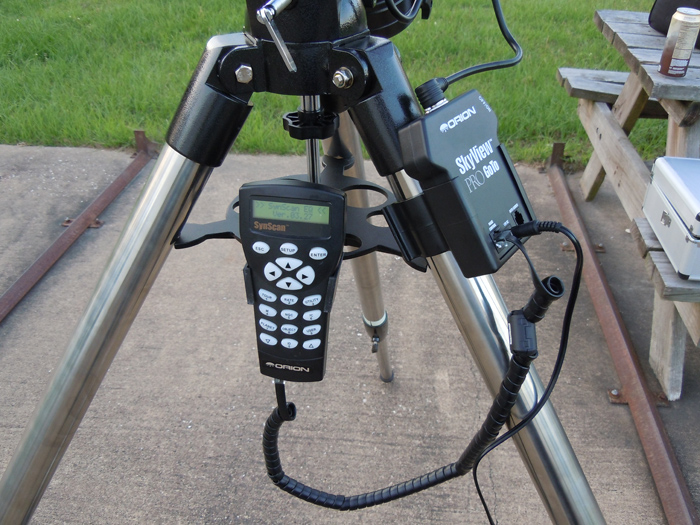 There are some things I do not like about this mount, starting with the rear cover for the polar scope. This cover just “fits” on, not really snapping, and not screwing, into place. Even looking in its general direction makes it fall off. Heck, while slewing if a cable brushes it, it comes off. Come on guys, I will pay the extra quarter, put some threads on it!

Next, for those of us that really use our equipment, the little rubber coating on the bottom of the tripod feet is a real pain in the rear. Why, you may ask? It eventually comes off. Not all at once mind you, but a little here and there. This messes up your leveling (if you always set up in the same place, once leveled you can lock the legs and never have to level again, until the rubber starts to come off one leg). Save some hassles later, remove the rubber coating as soon as you get this mount.

Lastly, I do wish the polar scope was lit although I generally set up right at dusk so that is not too much of a problem.

Overall the Orion SkyView Pro is an excellent goto mount that I would highly recommend for both visual and lightweight AP work. My only serious complaint is that it is a little too expensive when there are very capable alternatives such as the CG-5 or VX from Celestron. If you could get the SVP, CG-5 and VX mounts for the same price, it is a no brainer for me, the SVP rules the roost. Unfortunately for Orion you can still get the CG-5 from High Point Scientific for $549 new making it a much better overall deal.

Once High Point’s inventory is gone however, the Celestron VX series is showing a price of $799, just $50 less than the SVP, so in that case, I would splurge and take the Orion SkyView Pro over the VX, if for no other reason than how the SVP works with EQMOD and computer control.