If you are in the market for a moon globe, there are only a few real choices. One of the most popular of those choices for years has been the Sky & Telescope moon globe. 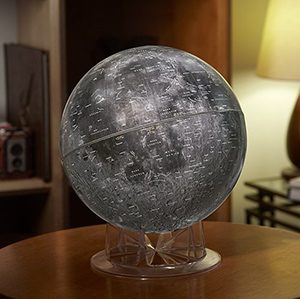 Even as a child, long before becoming an astrophotographer, I was fascinated by the moon. As a kid however things like a globe of the moon was just out of the question. Now that I spend a good portion of my time on astronomy related endeavours, I found room on my desk for another little toy, my own moon globe.

I wanted something that was of course fairly accurate, and something that was large enough to actually be used as a globe. Sure, like most astronomers and astrophotographers I have maps, charts, and programs that will show me every inch of the lunar surface. That is just not the same as seeing where things are in relation to one another, and in relation to the entire sphere.

Once I narrowed it down to the globes that were reasonably current and around 12″ in diameter, that left me with three choices; the Sky & Telescope model, the Replogle model (probably made the S&T one too) and the Watanabe 3063.

The S&T model moon globe was the best looking sporting a dark gray color, it also had excellent reviews. It is hard to argue with Sky & Telescope, they are very high up the food chain in astronomy circles. The other two, not so much. The S&T one went for $99, not too much. 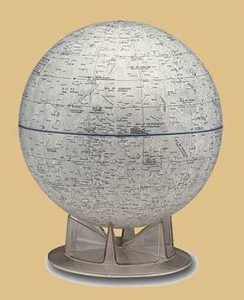 The Replogle moon globes I found were a little cheaper, but seemed based on an older lunar map, and also had more complaints about fit and finish. I thought this odd because it sure looked to me that they were made by the same people that made the S&T globe, right down to the base. This globe came in at around $80. 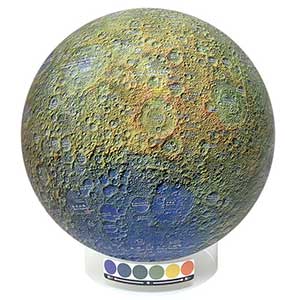 Lastly, there was the Watanabe 3063 which is a color moon globe where the colors denote the heights of the surface features. The Watanabe is the only topographic moon globe in this roundup. This moon globe supposedly uses data from the Japanese Kaguya spacecraft to make the mappings extremely accurate. 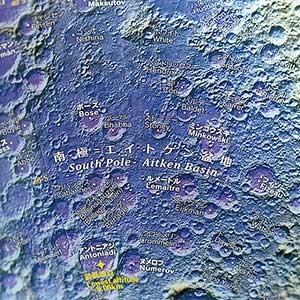 Indeed if you look close at this lunar globe, it appears to be extremely detailed, and it should be for the $175 asking price.

I decided to go with the S&T model for now as the more realistic appearance of this moon globe was more important at the time than the hyper detailing on the Watanabe model. 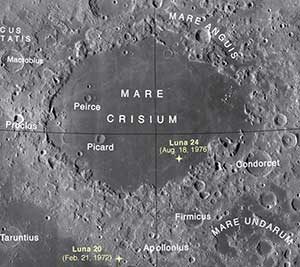 Detail on the globe is very good, everything I was expecting. To see all the detail I needed a magnifying glass, and even with that, the detail holds well. With enough magnification you can of course see the pattering in the printing, but that is at such a magnification that it does not detract from exploring the surface at all. 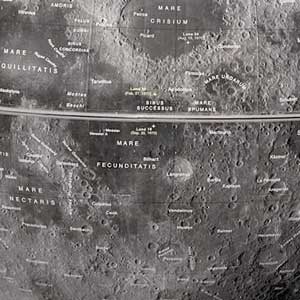 This moon globe and the Replogle one both have an obvious seam running around the equator of the moon. Once you get one at look close, you can easily see this is where two images have been taped together. No attempt has been made to hide this fact, and it stands out pretty obviously even from a distance. This would be my main complaint with this moon globe.

In comparison, no picture of the Watanabe globe I have seen seems to have any seam at all. This may be the feature that drives me over the edge and forces me to lay down the money for the more detailed, color coded, Japanese globe.

Overall however, I am happy with my purchase, it was the best moon globe for me. It may not be as detailed as one, and more expensive than the other, but I think it strikes a nice balance and looks dang good sitting on my desk. The Replogle is too light colored, and the Watanabe is too multicolored, to pull off what I was looking for. You however, may have something entirely different in mind with your moon globe so those may be a better fit.

If you like the S&T moon globe, you might also look at their other globes, such as the their ones of Venus, Mars and Pluto.

I hope you enjoyed my review of my new Sky & Telescope Moon Globe!