for quite some time and it never really dawned on me to write a review of it. I suppose I never thought of it because it is just an accessory that happens to sit between the camera and the telescope and since it never gave me any serious problems making it just vanish from my thoughts. Well, not so much. 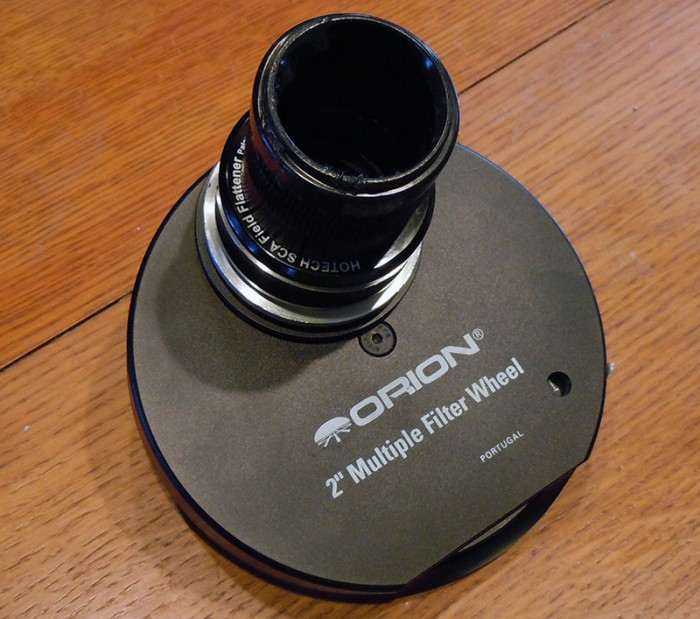 The Orion 2″ multiple filter wheel does a lot; it houses four filters (Light Pollution, Ha, O3 and S2), it has my HOTECH SCA 2 Inch Field Flattener for Refractor Telescopes attached, and it supports my camera on the end of everything. Every image I shoot (except for spectra) is shot through this attachment regardless of which camera I use. I would say that makes it pretty darn important!

I picked this particular wheel because I was ordering a lot of stuff from Orion anyway so it made sense to get it from them.I chose the four position so that I could have all four filters I knew I eventually wanted mounted inside.

The 2″ was perfect because when using a DSLR or full frame CCD you can get some pretty significant vignetting of the image with smaller filters, and besides, my focuser was 2″ already so it just worked.

I decided on manual for two reasons; it is far cheaper and I really did not see the advantage of the automated one when I will be right there and can change filter any time I need to in a second or two. Yeah, I am starting to wonder how nice it would be to just program in the sequence I want and let everything happen but I am already lazy enough, I don’t really need any help.

There are a few minor complaints however. My biggest being that there is nothing to tell you which way to turn the wheel, and it will turn either direction. Did I just go from filter 1 (the LP filter) to filter 2 (HA), or to filter 4 (S2)? I solved that problem by cutting out an arrow from a fairly stiff glow in the dark tape I purchased to wrap around my tripod legs. 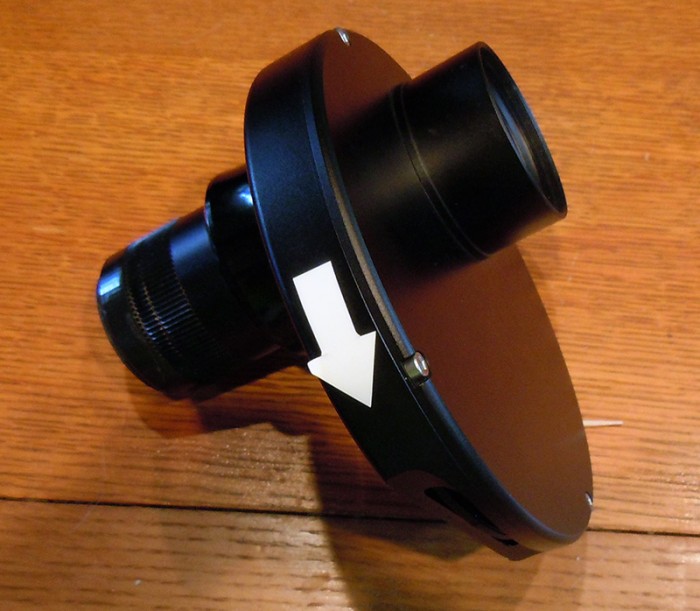 As you can see in the above image the arrow is really easy to see, even when it is no longer glowing. If the wheel is in a weird position and you can’t really see the arrow, the tape is thick enough you can easily feel where it is pointing. I would have really liked it if they made it where the wheel only turned one direction.

My second complaint with this filter wheel can be seen in the image above. I am not sure who thought it would be a good idea to have a small silver number in a little window but they were wrong. When the telescope is in a position where the wheel is near the ground facing down, and it is freezing cold so you are wearing a ton of clothing, you can not see anything but a blur. I have had to take a picture with the flash on my phone and then zoom in on that image to figure out what the number said. Sure, if you know you started on filter 1, and you know you moved two detents over to filter 3 you should be fine. This assumes no one is talking to you, pats you on the back because they are leaving, or a rustling in the bushes behind you startles you. Trust me, it has happened more than once. 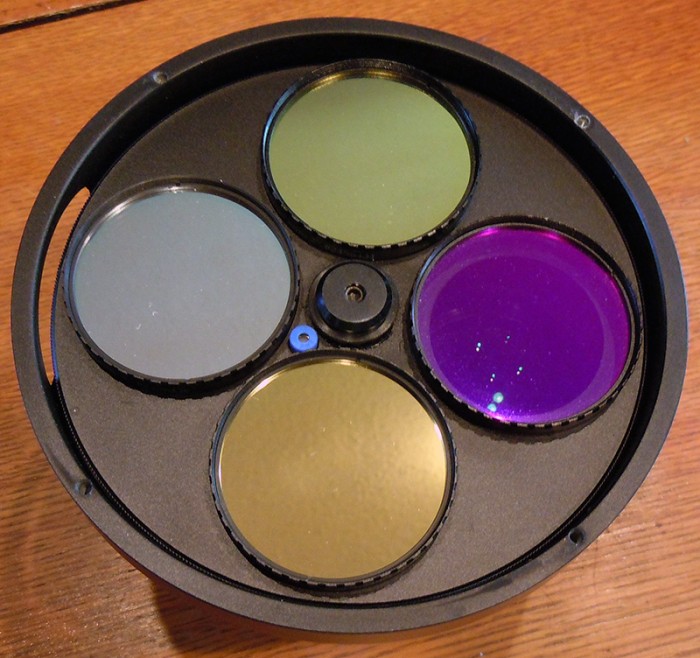 Other than those little complaints the filter wheel is very well built. This is not some little flimsy piece of plastic but is solid and fairly substantial metal. The interior is well built and holds everything as it should. It has always worked as advertised and without hesitation. As I get older I find myself wondering what an electronically controllable motorized filter wheel would be like but other than that I have no problem recommending this wheel to anyone.

Yes, it is a little expensive for a manual filter wheel (around $200 as I recall), but that money is spent in this case on a well built piece of metal that if cared for even a little bit should last you pretty much forever. Remember, you can help support this blog by purchasing items through links on it such as this Orion 2″ multiple filter wheel available from Amazon.

Thanks for reading my review of the Orion filter wheel!