At some point most of us need a portable power station or source out in the field.  Some of the ones from the telescope manufacturer’s can be a little pricey. Most of us also have a department store in reasonable distance. Most of those department stores carry units like this so I decided to see what they had on the shelves that might work. It really wouldn’t be much of a review if I didn’t have something to compare it to so I will be comparing the Schumacher Portable Power Station XP2260 from Amazon 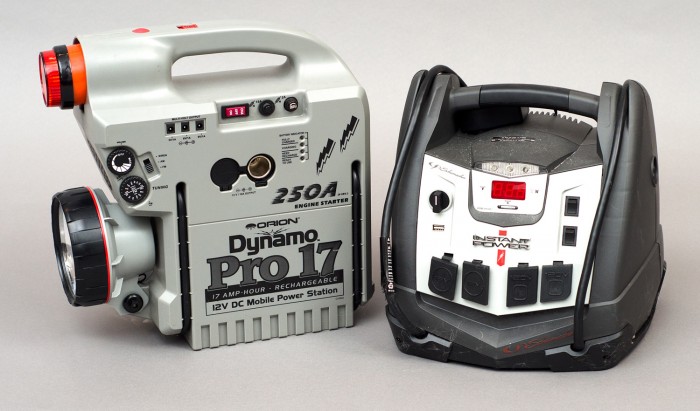 Looking at the specs it seems that the Schumacher XP2260 has more power, a built in AC inverter, a longer warranty, a digital readout of the percentage of battery charge, and a longer warranty. It also costs less.

It shares pretty much the same specifications and price as the Orion model.

The Orion comes out on top if you want a built in radio, brighter light, red light, or the ability to power other items with the included charging adapters for DC devices. Unfortunately none of this appeals to me, or for that matter, anyone else I know of in astronomy.

The Schumacher comes out on top because in addition to the superior specs, the it has a wider base and is shorter than the Orion unit making it much more stable sitting on the ground. It would also be more stable in the trunk of your car. The Orion and Celestron models just about have to be transported on their side or they will fall over the first time you hit the brakes.

On the Schumacher I am not particularly pleased with the 12V ports as they seem to come lose very easily. It very well may be the type of 12V connector I am plugging into it. I resolved the issue by using a splitter cable which plugs into the battery unit and then allows me to plug in two power adapters.

After using both battery units for a while I would be hard pressed to recommend the Orion over the Schumacher XP2260 with one catch. I would venture to guess that if you had your Orion telescope plugged into the Orion unit and something went horribly wrong with your telescope due to power issues, they would cover it under warranty. This assumes that both the mount and battery unit were under warranty to start with. If however that same thing happened while plugged into the Schumacher unit, I seriously doubt that either company would cover anything.

While I admit this is complete conjecture, the small price difference between the two units is a small price to pay for the extra insurance assuming you are buying a new telescope and power unit at the same time. The bottom line is that while I certainly would not purchase a telescope from a department store, I absolutely would recommend a battery unit from one.