Pixel size, sensor size and many other factors seem to complicate our choices for cameras these days. Just when you thought cameras could not get any more complex with ISO range, well depth, and active/passive cooling I’m here to throw another wrench or several into the mix.

Lets start with pixel size or pixel measurement which should really be called photosite size. The actual sensor on a digital camera is made up of light detectors called photosites. These photosites are what create the pixels in the image. Each photosite measures the light hitting that sensor and generates a signal in proportion to the amount of light hitting it that is sent to the processor inside your camera. 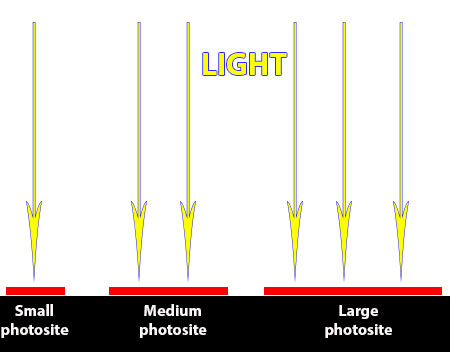 As a general rule, the larger the photosite size the more light it can gather simply because the larger area will be struck by more photons. More light striking the sensor means a higher signal output by each photosite. This in turn means it will require less amplification (a lower ISO) to achieve the same results as a camera with smaller photosites. You could also say that at the same ISO the camera with the larger photosites could use a faster exposure.

Since you can collect more light with a larger photosite size that also means that you have a higher signal to noise ratio (SNR). This is particularly important in astrophotography because we are always shooting an extremely dark object (nebula etc) against a totally dark background (black of space). Since there is so little contrast or difference between the object and the background, it is important to have the highest SNR possible. The reasoning is that when there is a lot of noise, it is much more difficult to extract the signal.

Think of it as audio. When you are at a live concert the band is the noise, then you try to talk to the person next to you which is the signal. This is very difficult to do at a heavy metal concert (high noise) but far easier at a concert featuring an unplugged classical guitarist (low noise). Since in astrophotgraphy you are always shooting long exposures (compared to normal daylight photography) and using high ISO values when you can, there is a lot of noise injected into the images.

A larger photosite size will have lower noise primarily because the accuracy of the measurement from a light sensor is proportional to the amount of light it collects. In other words, if a sensor collects one photon over a one second exposure it will be dramatically less accurate than if it collects one hundred photons. This occurs because every photosite has an amount of noise that happens when the sensor is read (read noise) and a certain about of noise per exposure (shot noise). This amount of noise does not substantially change from a one second exposure to a two second exposure whereas the number of photos captured doubles. More photons collected means a lower amount of noise in relation to the number of photons.

Now to be technically correct, the amount of noise does change as the exposure time changes, but it does so far less than the increase in the number of photons collected. In fact, the signal is the squared amount of noise, or the noise is the square root of the signal, whichever is easier for you to remember. If the signal is 900 photons, then the noise is 30 which gives you a SNR of 30. Double the incoming light to get 1800 photons and you get a noise of roughly 42.5 and a SNR of about 42.5. As you doubled the light collected in this example, you increased the SNR which made it easier for you to pull really dark objects out of the muck.

The next effect of a larger photosite is in dynamic range. A dynamic range is basically the amount of difference between the darkest a sensor can record and the lightest. In a previous article I discussed full well depth as being the maximum amount of light a photosite can store and that is an important player in dynamic range.

In figure 2 above the numbers across the top represent percentages of saturation of a photosite. Since this has such a small dynamic range everything from about 19% through 33% all reads as the same color. This is not what you want in astrophotography where the nebula is almost as dark as empty space.

In figure 3 we see that there is far more definition so there are two different shades for objects in the same range of 19% through 33%. The higher the number of shades on this chart, the higher the dynamic range. More dynamic range makes it easier to separate nebulas and empty space.

Two primary things affect dynamic range, the ISO and the well depth. Since a larger photosite size or larger sensor size typically has higher full well capacities and also require lower ISO values for a given exposure, they tend to have far superior dynamic ranges.

In figure 4 we see how the dynamic range (DR) and SNR both drop as the ISO increases. The D7000 camera used above is what is typically called a crop sensor (APS C sensor size) camera which typically has substantially smaller photosites compared to a full frame sensor camera. To get a general idea you could say that the dynamic range of a crop sensor camera at ISO 800 is 10.75 and for a full frame camera is 11.75 at the same ISO. While this is a massive generalization (and really wrong 99.9% of the time) it does give you the right idea.

This sounds great! Are there any down sides? Maybe.

One argument for smaller photosites is that they capture more detail. This stands to reason since the same amount of light would be spread across more photosites on a smaller sensor and therefor more pixels. It would simply be a matter of more pixels in the same image meaning more detail. True enough.

Another concern is that crop sensor cameras have a crop factor built in. This means if you shoot a full frame image with a 50mm lens and then put that same lens on a crop sensor camera what you wind up with is the photograph looking like it was shot with up to a 75mm lens. This is because the lens puts the same size projection of light at the sensor plane (where the sensor is) and if you have a smaller sensor, less of the image appears on that sensor. This makes the image appear to be zoomed in.

While the image being zoomed in has no real bearing on the image quality, it can really throw a wrench into things when you bolt that camera onto a telescope. An object that fit perfectly on your full frame camera’s sensor now spills over the edges on the new crop sensor camera you just bought.

The last and probably most important factor is that a larger photosite size or a larger sensor size typically cost more money. This money could be spent getting something with a better cooling system or some other feature. Only you can decide where to spend your finite resources and which features are more important than others.

So what does sensor size have to do with anything other than maybe having a crop factor? A larger sensor simply has more room for larger photosites, or a higher number of smaller ones as compared to smaller sensors.

I hope you enjoyed my article on pixel size and sensor size!